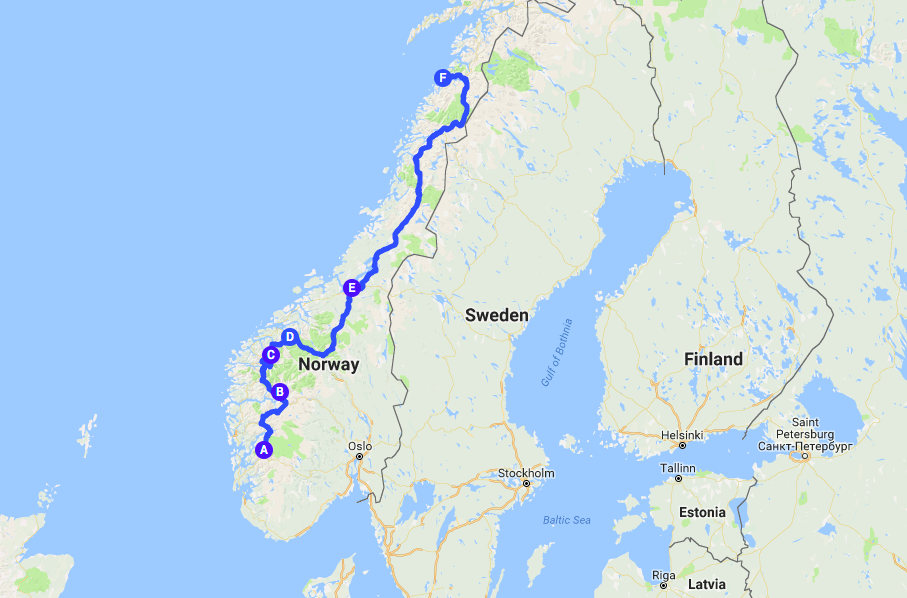 It was time to head north or else I would stay in Norway forever! There is just so much to see that you could easily spend weeks traveling on just the south and west part of Norway.  After hiking the Trolltunga I made a quick 5 day stop in Solvorn where the Eplet Bed and Apple Farm is located. I recharged my battery and catch up on all my blog writing and social media posts before heading out to Geiranger fjord with my new road trip buddy; Maaike from the Netherlands. Read how we came across the Bøyabreen Glacier, did a fjord cruise for free and how I had to sleep in my car in the port of Bodø, waiting for the ferry to Lofoten that might never come! This is; 25.000 km Europe road trip part 5 : Odda, Geiranger to Bodø

Whilst driving from Odda to Geiranger Fjord, we came across the Bøyabreen Glacier on the main road in Fjærland. Just take the exit that states “Bøyabreen” and after 5 minutes you will drive up to the Brevasshytta café, where you can sit by an amazing panorama window to have a nice meal with a view. The ice waterfall is just a 10-minute walk down from the café. Definitely worth a visit and does not have to cost anything if you bring your own food.

A day out at Geiranger Fjord

We arrived in Hellesylt and stayed in the local hostel. This was easier as the ferry towards Geiranger was right in front of the hostel and spending the night in Hellesylt was much cheaper then in Geiranger. The beautiful Geiranger Fjord is considered one of the most beautiful fjords in the world. Did you also know it is listed on the UNESCO World Heritage list? It is 260 meters deep and the mountains surrounding the fjord can get up to 1750 meters in height. Wow, that is going to be amazing tomorrow!

The following day we took the ferry from Hellesylt to Geiranger. The duration is about one hour and shows all the beautiful sights the fjord has to offer. We came across the famous waterfalls “The Seven Sisters”, which from a distance resemble the hair of seven women. On the opposite side of the fjord you can see ”The Suitor”, which is a waterfall shaped like a water bottle. The guide was explaining that the “The Suitor” proposed to ”The Seven Sisters” several times and was turned down on several occasions. This resulted in the “The Seven Sisters” never getting married and the “The Suitor” becoming interesting in the bottle and started to drink. Oh the drama.. haha! 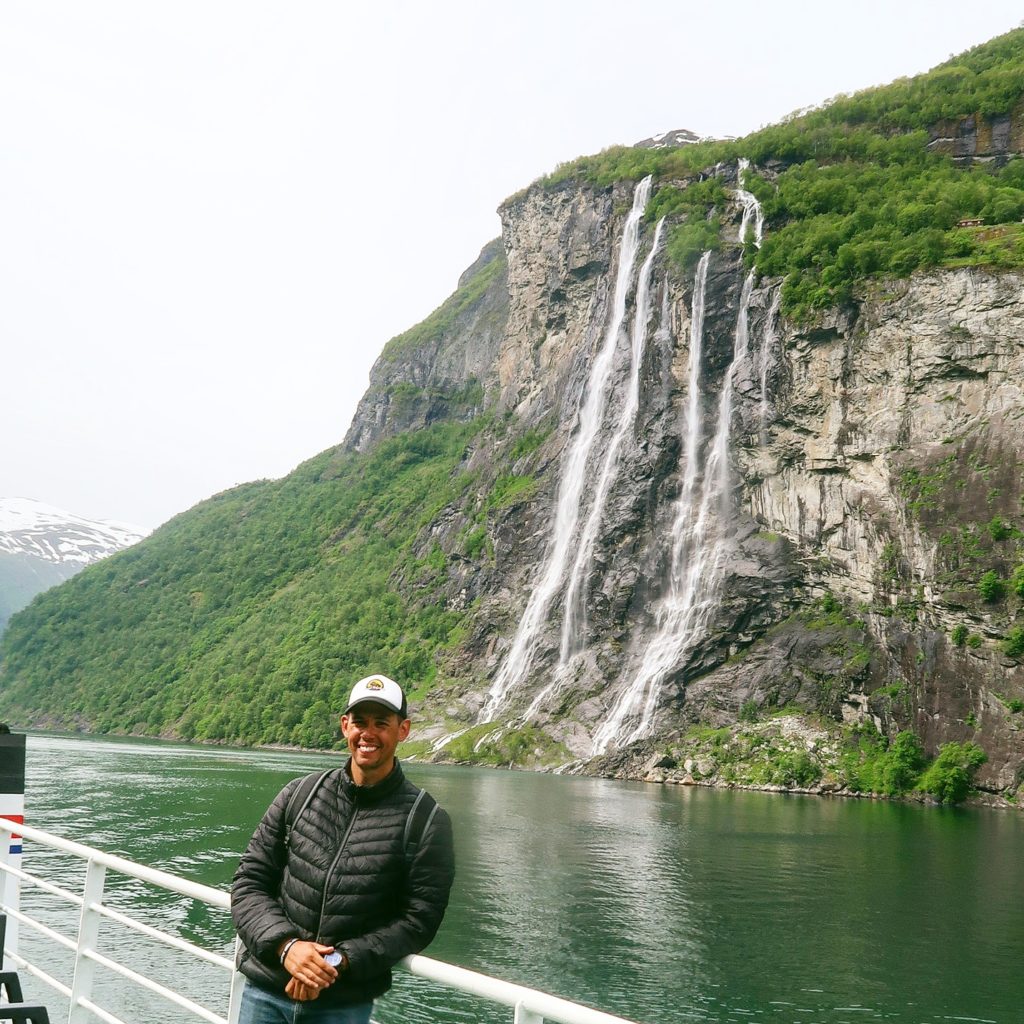 There are also several farms you can see along the way such as Knivsflå , Skageflå, Matvik, Blomberg and the Syltevik. The best time to visit is from June through July. This is because the waterfalls reach their maximum size as the snow is melting. 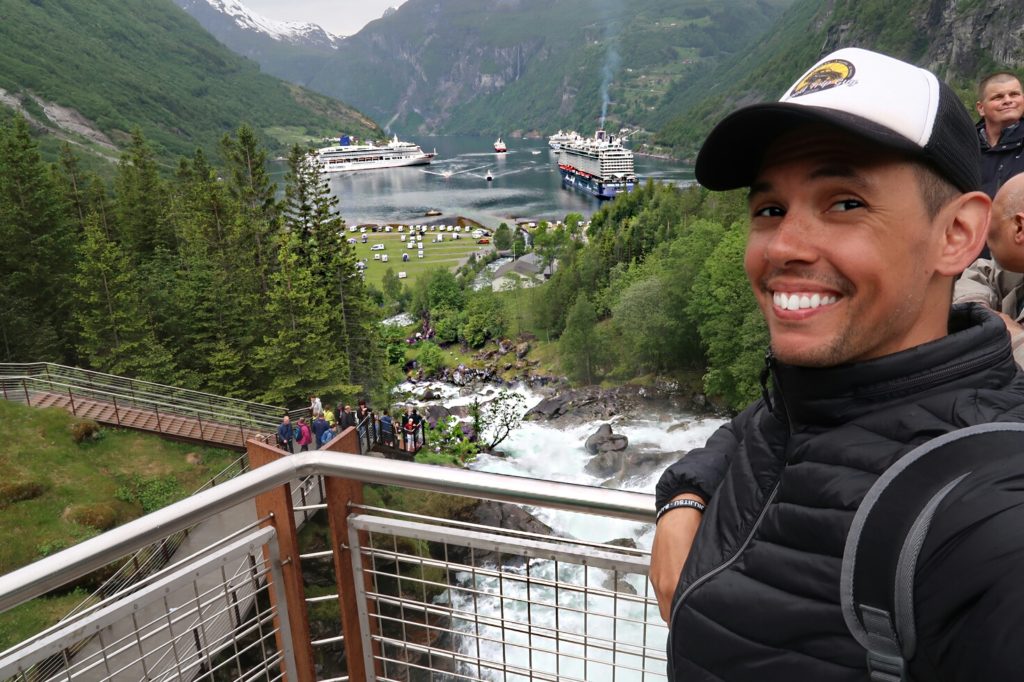 Ticket prices for the Geiranger ferry

The price normally for a return ticket on the ferry is 340 NOK (€ 34,- / $ 37) and for a single ticket 240 NOK (€ 24,- / $ 27 ). The strange thing was that we were told to buy the ticket on the boat, whilst on the boat they said to buy the ticket in front of the boat. Once I got back downstairs to the main deck, all the staff was already gone so I assumed I would just explain to the officer if they come and check. After all, I asked several staff members where to buy a ticket and everybody was saying something different. The check up never came and we got the first way for free. Lucky me!

After saying goodbye to Maaike it was time for me to make some kilometers as I was getting behind on schedule. First stop was the famous Trollstigen that was on route with my final destination for the day; Trondheim. The Trollstigen (“The trolls road”) is a famous curved road that takes you through the beautiful Romsdal Valley. Perfect to take Lazy Louie out for a much-deserved spin and with 858 meters above sea level it is a thrilling ride! On top is the Trollstigen platform where you can watch the gigantic waterfall slam down on the Trollstigen. What a joy to ride!

After the Trollstigen, it was almost 5 hours and 325 km. to Trondheim. It was a smooth and easy road and I stayed for 1 night in Trondheim before heading more up north towards Bodø. Why Bodø? Bodø had a ferry connection from the mainland of Norway towards the famous Lofoten. And for just 740 NOK (€ 74,- / $ 80) for car + driver it was to good to pass on.

The problem? The Ferry was leaving at midnight and I still had to drive 705 Km. , which on Norway roads takes at least 11-12 hours!

I planned out 16 hours and left early in the morning, but there was a large amount of construction going on and the speed varied between 80, to 60, to 30, back to 80 km/hour. Very frustrating with driving, but whoever goes crazy last, wins! So, eventually I arrived at the port of Bodø at 10.30 PM. Still in time, so I thought!

Taking the ferry to the Lofoten Islands

Apparently, that particular night the ferry company was making a switch between their winter schedule and summer schedule. Therefore, the midnight ferry was no more, but also no clear schedule was available on when the next one ferry would departure from the port. With all other hostels already being closed I decided to sleep that night right in front of the docking area of the ferry. That way I knew for sure that if the boat did arrive the noise of its arrival would wake me up!

At 02.45 AM somebody woke me up by knocking on my door. The ferry had arrived and at 03.15 AM it would depart. I quickly bought a ticket and parked the car in the lower decks. The price for a single ticket was 100 NOK cheaper when bought on board then online. You can easily save yourself some bucks there!

It was time to get 3 hours of sleep as we would be arriving in the Lofoten at 06.30 AM. What I was going the witness next was beyond my wildest dreams!

Your No.1 Portugal Road Trip Itinerary Guide [ An Expert Point Of View! ]

Let’s go for a drive, shall we?

Your No.1 Portugal Road Trip Itinerary Guide [ An Expert Point...

ABOUT US
Newspaper is your news, entertainment, music fashion website. We provide you with the latest breaking news and videos straight from the entertainment industry.
Contact us: office@yoursite.com
FOLLOW US
© Newspaper WordPress Theme by TagDiv
MORE STORIES